The International Role of the Euro 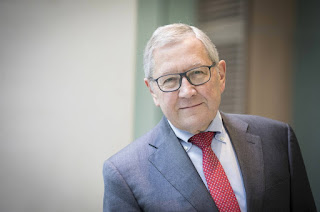 As the founding Managing Director of the European Stability Mechanism (ESM), Klaus Regling is uniquely conscious of the role of the euro in steering the fortunes of the euro area. His work on the currency union predates the ESM and the European Financial Stability Facility (EFSF), to earlier collaboration with his friend Max Watson at the International Monetary Fund and the European Commission. Hence it was fitting that he dedicated the third Max Watson memorial lecture to his vision for the future of the euro, which he and Max cared so much about.

Regling made a persuasive case that unalloyed global dependence on the dollar left the world unduly vulnerable to US monetary policy and domestic developments, as seen in the Latin American crisis, Asian crisis, and global financial crisis. A wider international role for the euro would strengthen global financial stability, as well as supporting growth and integration within Europe.

Regling explained that he envisages not a dual dollar/euro system, but a multi-polar system—since China also has begun to prioritize greater global influence of the renminbi. Multi-polarity in itself would have benefits for global financial stability, by offering possibilities for diversification and hedging. But in such a world, Europe would offer additional advantages of trust and credibility, which should help its currency stay a strong second global currency. Besides Europe’s economic size, it offers a credible legal system, with stable rule of law and investor protection. It has an independent central bank, and operates advanced, open financial markets.

Europe’s comprehensive response to its crisis restored and further strengthened the influence of the euro. The response included large EFSF/ESM financial support to safeguard stability in euro area countries which could not use the exchange rate instrument, as well as banking, fiscal, and structural reforms, and closer policy coordination. Happily, it is clear that Europe’s stability is now more assured. For instance, banks have slowly worked their way through the Non-Performing-Loans legacy of the 2010-11 crisis, and have been a stabilizing factor rather than a vulnerability during covid.
Read more »
at November 24, 2021 No comments: 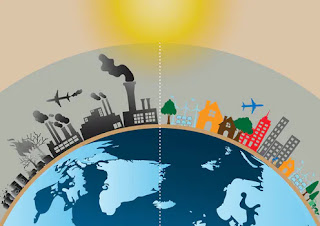 The UN-led Conference of the Parties (COP) process of global climate negotiations has built on the delicately-crafted 2015 Paris Accord and achieved a high level of legitimacy across the international community. However, progress towards climate goals remains inadequate.

This blog reports on a seminar in the Political Economy of European Climate Action series, hosted by the European Studies Centre of St. Antony’s College Oxford, on June 14, 2021, which discussed whether the COP process can be made more effective to deliver climate goals. The speakers were Selwin Hart (ASG for Climate Change, UN) and Benito Müller (Professor, Environmental Change Institute, University of Oxford); the discussant was Adrienne Cheasty of EuPEP; and the session was chaired by Hartmut Mayer, Director of the European Studies Centre at St Antony’s College, Oxford.

Selwin Hart started by outlining the stakes, quoting the UN Secretary General as saying that 2021 would be a make-or-break year for climate action, with COP26 in Glasgow in November. We now have less than a decade to achieve effective emissions reduction before it becomes too late to cap global warming below 2°C.
Read more »
at June 25, 2021 No comments:

Saving the planet: The ethical and economic case for regenerative agricu...

Saving the planet: The ethical and economic case for regenerative agriculture 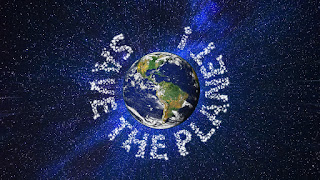 This EuPEP webinar took place on 2 June. The speaker was Philip Lymbery, Global CEO of Compassion in World Farming; the discussant was Professor Tim Lang of City University, London; and the Chair was David Madden.

Philip Lymbery said that about 10,000 years ago human beings changed from being hunter-gatherers into settlers relying on agriculture. Then, a generation ago, mankind tore up its contract with the soil, and with natural farming, and turned to factory agriculture. The results were, with a world population of 7.8 billion, 80 billion farm animals were raised per year: 2/3 on factory farms. The livestock sector produced 14.5 % of GHG, more than all the exhaust fumes from the world’s planes, trains and cars. Agriculture occupied half the world’s habitable land. 83% was dedicated to animal production, providing humanity with just 37% of its protein and 18% of its calories. The food system produced enough for 17.5 billion people, but nearly 2/3 of EU cereals were used as animal feed. We were exceeding planetary boundaries. The two sides of factory farming were cages for animals, and arable land used to produce their feed in monocultures. This was based on chemicals(fertilisers and pesticides) with great damage to the natural world and biodiversity. The system also distorted economics: farm subsidies cost $700 billion per year worldwide, 50 billion euros per year in the EU (40% of EU budget), and £3+billion per year in the UK. The main beneficiaries were the global meat industry and the companies producing fertilisers, pesticides, pharmaceuticals and grain. The EU was leading the way in pushing back. 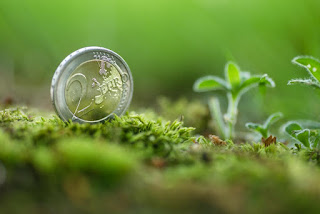 Green sovereign bonds—government borrowing tied to expenditure commitments to climate action—are becoming more common. Notably, the European Union has decided to issue green bonds to finance its coronavirus response program. But how effective will official-sector green bonds be in delivering on climate goals, and could we do better?

Hardy started by documenting the recent proliferation of government green bonds (issues by Germany, UK, Italy, Hungary, Poland, France, Belgium, etc., etc.) but reminded the audience how small this financing still is: government green bonds make up much less than half a percent of world debt; the planned €250 billion issue of Next Generation EU bonds would more than double their stock.

He then examined governments’ motivations for choosing green bonds (instead of plain untied borrowing) and—spoiler alert—found that official green bonds have significant shortcomings in delivering on these objectives.
Read more »
at May 31, 2021 No comments: 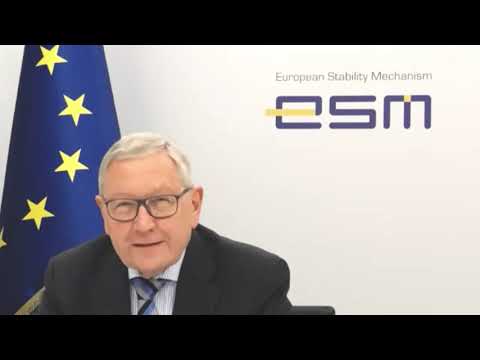